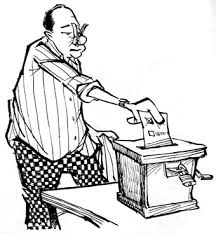 Now having said all that, why the hell would I vote for a lying, murdering, backstabbing bitch?  Because she’s running against Donald Trump and I live in Ohio which is a swing state.  Donald Trump is to much of a danger to our country I’ll list my reason below:
Now I’m not happy about voting for Clinton, and if Ohio was in the bag for either candidate I would have voted Libertarian in protest of the two clowns the major parties put up, but we’re a swing state and I care more about my country than and my protest and while Hillary won’t get anything done in four years, at least she won’t destroy this country.
Now if the Republicans can pull their heads out of their asses, fire Reince Priebus out of a cannon into the side of Trump Tower, realize they need a moderate candidate, and nominate someone like John Kasich, then I’d vote for the Republican and kick Hillary out.
And let me just say I voted against John Kasich for Ohio Governor twice, but if it was him against Hillary Clinton then I’m voting for Kasich every time.

So there you have it, and if any Trump supporters want to tell me “if you really loved your country you’d have voted for Trump” please go back and read why I won’t vote for him.  Anyone who says anything even close to that, even s a joke, will be blocked.  You are entitled to your opinion but keep it to yourself, you don’t tell me why you think I’m wrong and I won’t tell you why I think your wrong. I’m just stating my personal opinion on the matter, I’m not looking for debate, if I was I would have posted this a few months ago not less than 24 hours before the polls close.

Oh and by the way if you really want change in our government try reading Republic Lost by Lawrence Lessig.

Previous Post: Political yard signs
Next Post: We need to communicate our concerns about Trump to congress